Fresh clashes broke out Thursday between Palestinians and Israeli police at the Temple Mount after the flashpoint Jerusalem holy site was reopened to Jewish visitors amid threats by the Gaza-ruling Hamas.

The Temple Mount was shuttered to Jews on April 21 until the end of Ramadan, as part of a years-long policy of barring non-Muslims from the compound for the final days of the Muslim holy month. This year’s closure came after days of clashes at the Temple Mount that began the morning of April 15when Friday prayers for Ramadan, Passover and Good Friday all coincide.

Non-Muslims were again allowed back on the Temple Mount as of 7 am Thursday, as groups of Jews lined up at the Mughrabi Bridge, from where non-Muslim visitors are required to enter the holy site.

Video from the Temple Mount showed Palestinians shouting chants in Arabic as Jewish visitors passed by, including “God is great” and “with spirit, with blood, we’ll redeem Al-Aqsa!”

Scuffles between Palestinians and cops erupted shortly later, when police said dozens of rioters began yelling “incitement” and hurled rocks and other objects toward officers, who responded with riot dispersal means.

According to police, a number of Palestinians entered the Al-Aqsa Mosque as they were pushed back by officers, two of whom were lightly injured in the clashes.

According to a police statement, some rioters who entered the mosque attempted to throw objects, including chairs and rocks, toward officers, which caused damage to the mosque itself.

Police later said they arrested 21 suspects that took part in the morning clashes,

“Per their recent custom, they began rioting and throwing objects from within while causing damage to the mosque and desecrating it,” a police statement said.

Footage also showed Palestinians inside the mosque using a loudspeaker to play a recent speech by a leader of the Hamas terror group in which he threatened Israel over the Temple Mount.

Palestinian witnesses said there was no sign of stone-throwing initially and that the scuffles broke out after officers went to arrest a Palestinian for chanting “Allah-u Akbar” (God is greatest) at the Jewish visitors.

“The visits are continuing as usual without disturbing the worshipers at the Temple Mount,” the police statement said.

“Happy Independence Day,” he wrote in to tweet that included a photo of him during the visit.

The Temple Mount is the holiest site in Judaism as the site of the biblical temples and the third holiest in Islam as home of the Al-Aqsa Mosque.

Under the fragile status quo on the Temple Mount, only Muslims are permitted to worship. Non-Muslim visitors are allowed to visit at specific dates and times, and Israeli police have detained Jews openly praying at the scene in the past. 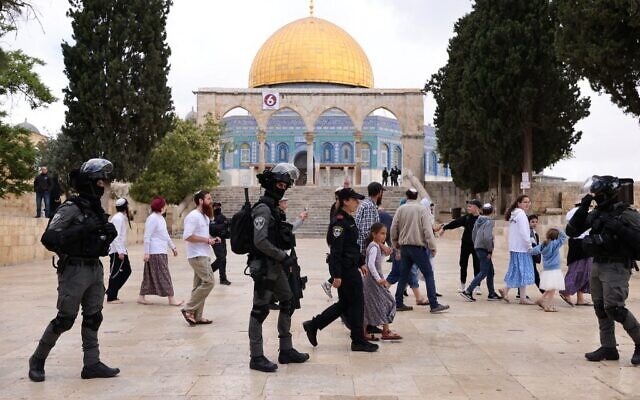 Israeli police accompany a group of Jews touring the Temple Mount on May 5, 2022, as the Jerusalem holy site was reopened to non-Muslim visitors. (Ahmad Gharabli/AFP)

Ahead of the reopening, nationalist Israeli groups announced that they planned to wave the Israeli flag and sing Israel’s national anthem atop the Temple Mount to celebrate Independence Day, which falls on Thursday.

Hamas threatened to retaliate if Jewish visitors were allowed to “storm” the holy site.

“The Zionist occupation authorities’ allowing flocks of settlers to storm the courtyards of the blessed Al-Aqsa Mosque on Thursday is playing with fire and drags the region into an escalation for which the occupation will bear full responsibility,” Hamas warned Wednesday.

Palestinians and Israeli forces have clashed repeatedly at the Temple Mount over the past few weeks. The violence echoed scenes from last year, when rioting at the site helped spark a war between Israel and Gaza-based terror groups led by Hamas.

Ever since the May 2021 war, Hamas, which seeks to destroy Israel, has threatened to fire rockets at Israel if it violated the organization’s “red lines” in Jerusalem. The terror group has hailed its “deterrence” against Israel in the contested capital as a key achievement of the war, which wrought widespread destruction in Gaza.

Hamas’s Gaza leader, Yahya Sinwar, said on Saturday that the terror group “will not hesitate to take any steps” if Israel “violates” Al-Aqsa Mosque.