Prime Minister Naftali Bennett on Sunday hit back at Hamas leader Yahya Sinwar for his threatening speech a day earlier, while taking a swipe at his predecessor Benjamin Netanyahu for allowing millions of dollars of Qatari cash to flow into the Gaza Strip under the terror group’s control.

“It seems to me that it is already quite clear at this stage that Hamas does not like this government. Maybe they miss the suitcases full of dollars, and maybe they just do not like the possibility of us all working together to better the living conditions of Arab Israeli citizens,” Bennett said at the start of the weekly cabinet meeting.

“This is the time that the masks come off and it is clear to everyone who wants what. That Hamas wants to overthrow our government, says it all. And in that, too, Sinwar must not be allowed to win,” Bennett said.

Under Netanyahu’s government, Israel allowed millions in Qatari cash to flow into Gaza on a monthly basis in order to maintain a fragile ceasefire with Hamas.

The “suitcases full of cash” policy was excoriated by Bennett and his government as a system to fund terror, and was replaced with a new aid distribution mechanism involving the United Nations.

In a Saturday speech filled with murderous threats and denunciations of Israel, Hamas’s Gaza leader Sinwar slammed Ra’am and his party chief Mansour Abbas, whom he called “Abu Righal” — a legendary traitor in pre-Islamic legend. 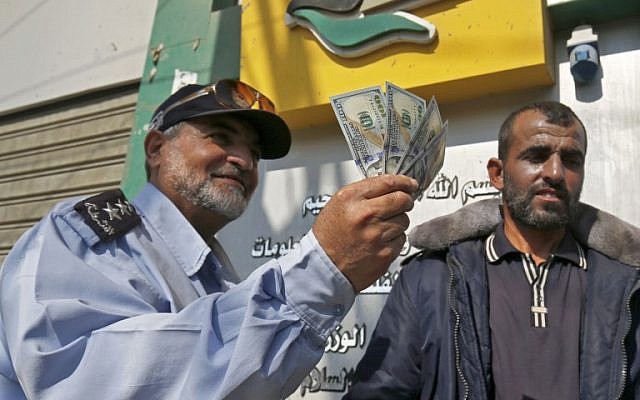 A Palestinian man shows his money after receiving his salary in Rafah in the southern Gaza Strip, November 9, 2018. (Said Khatib/AFP)

“That you serve as a support to this government, which violates Al-Aqsa, is an unforgivable crime,” Sinwar said.

Ra’am suspended his membership in the coalition after the recent clashes between Palestinians and police at Jerusalem’s Temple Mount, known to Muslims as the Al-Aqsa compound.

Although tensions have not escalated further, Ra’am has yet to officially rejoin the government.

Abbas has publicly embraced a political program that seeks to achieve tangible gains for Arab Israelis. 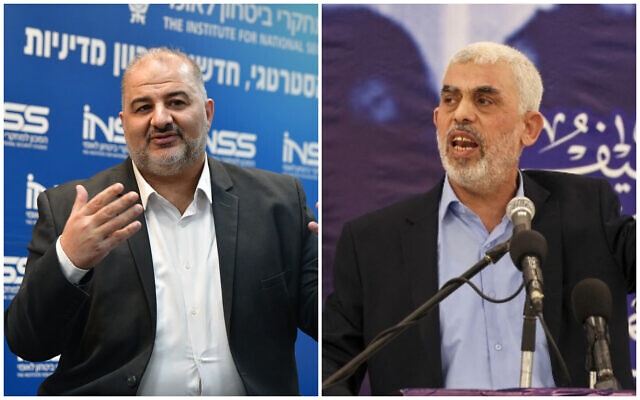 In interviews in both Arabic and Hebrew, the Islamist has said that Israel “was a Jewish state and will remain so.”

“For an Arab to say that this is a Jewish state is the height of degeneracy,” said Sinwar. “You get a few achievements for Arab society, in exchange for the violation of Al-Aqsa?”

Sinwar said the terror group “will not hesitate to take any steps” if Israel “violates” the Al-Aqsa Mosque.