The widow of Yonatan Havakuk, one of three men killed in a terror attack in Elad on Thursday evening, said her husband fought one of the attackers, enabling others to flee to safety.

“My heart refuses to believe that I was left alone with five orphans. My heart burns that my tender child saw his father de el in his last moments, ”wrote Linor Havakuk in a post in a Facebook group for residents of Elad.

“My husband fought against them with great heroism and saved many lives. He fought with them for long minutes, which allowed many to flee the scene,” she wrote. “God bless you, dear and beloved husband. We will miss you very much.”

Galit Gol, the widow of Boaz Gol, another one of the victims of the attack, decried her family’s loss.

“How did I lose him? God, why did this happen to us? Why do we deserve this? she shouted outside the family’s home in Elad, according to the Ynet news site.

“In one day my life ended. In one day everything turned upside down.” 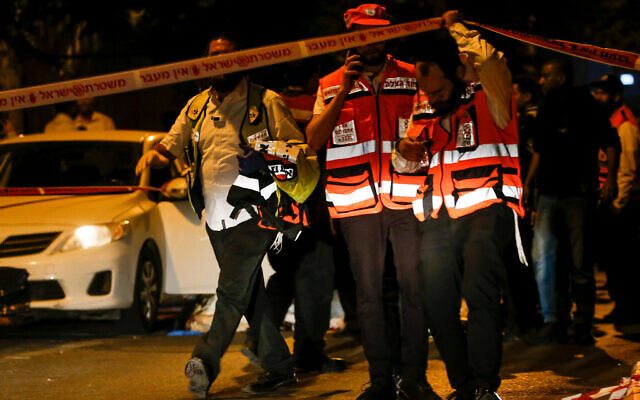 Boaz Gol’s sister-in-law said he was walking to a Torah lesson when he was killed.

One of Gol’s sons said he was studying at yeshiva when he heard about the attack.

“I called home and they told me dad wasn’t answering,” Or Hahayim Gol told reporters, saying that he was also unable to reach his father. Gol said he was then told to return home.

“I arrived home and outside they told me that dad lost a lot of blood and didn’t survive,” he said. He added that the family “has no other support,” saying his father would run errands and do all sorts of chores around the house.

The third victim in the deadly attack, Oren Ben Yiftah, was buried in Lod, where he lived, on Friday afternoon. He was working in Elad as a driver for an event, according to his family members of him.

The funerals for Havakuk and Gol were also held Friday afternoon in Petah Tikva and Jerusalem, respectively. The Elad Municipality announced the funeral processions for all three men would set out from the scene of the attack. 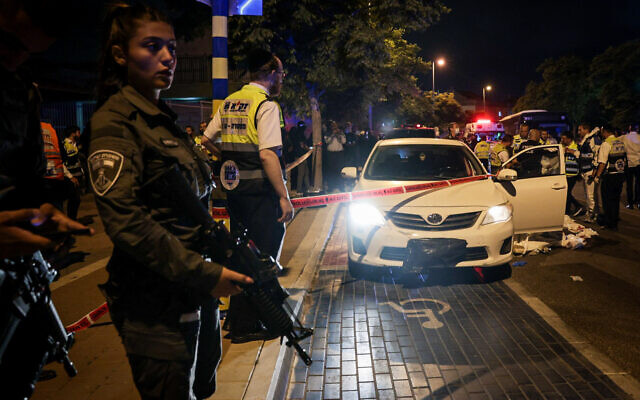 “He had a heart of gold, he only did good things and wanted to help others,” Lior told Ynet, saying that he had seen his brother only hours before the attack as they celebrated Independence Day together at a barbecue.

Since receiving the news, Lior said, “I am only in pain. My flower is gone, my heart has gone with him… I can’t believe my brother is gone.”

The three men, who were killed when two terrorists attacked a crowd of people in a park and on a nearby street with a knife and an axe, left behind 16 children between them.

At least three others were seriously wounded in the attack Thursday evening in the religious city of Elad in central Israel, which came at the tail end of Israeli Independence Day.

One of the men wounded in the attack was listed as in critical condition as of Friday morning following “deep ax wounds” to his head. He was stable but unconscious. 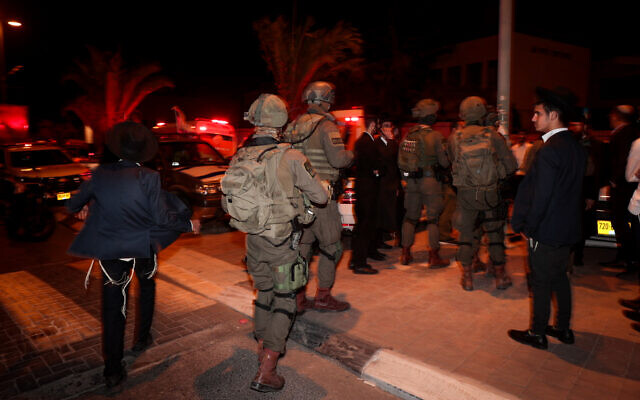 The 20-year-old male was being treated at Sheba Medical Center’s emergency neurosurgery department.

The son of another man wounded in the attack said he watched his father get stabbed.

“Dad said ‘where’s mom’ and [told me] to go home,” the boy said in a video circulating in Israeli media. “I thought the bad guys wouldn’t kill Jews but then I saw they actually stabbed my dad.”

“I saw two people, one of them had a knife. I said in my heart that this won’t also happen to us,” he added.

Israeli security forces have launched a massive manhunt for the perpetrators of the attack, who were still at large as of early Friday afternoon.

According to police, the security services believe that As’ad Yousef As’ad al-Rifa’i, 19, and Subhi Emad Subhi Abu Shqeir, 20, both from Rumana, are the two terrorists who carried out the attack in Elad. They called on the public to provide any information as to the whereabouts of the two men. 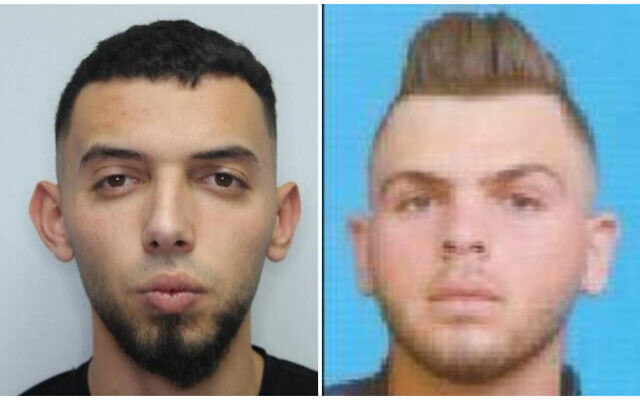 Hebrew media reports said the two entered Israel illegally through a breach in the West Bank security barrier. They are believed to have been familiar with the central Israeli city and may have worked there.

Elad, a town of some 50,000 residents, is located a short distance to the west of the West Bank security barrier, which has been frequently breached by terrorists carrying out attacks.

In addition to the suspects in the Elad attack, the perpetrators of the recent deadly attacks in Bnei Brak and Tel Aviv also hailed from Jenin and its environs.

Thursday’s attack followed a wave of terror attacks in Israel and the West Bank in recent weeks, and repeated threats by Palestinian terror groups over the Temple Mount in Jerusalem.

It brought the number of people killed in terror attacks in Israel and the West Bank since March 22 this year, to 19.

Emanuel Fabian and Aaron Boxerman contributed to this report.